JUSTICE LEAGUE #74 CVR A YANICK PAQUETTE & NATHAN FAIRBAIRN
(W) Brian Michael Bendis (A) Emanuela Lupacchino, Wade Von Grawbadger, Szymon Kudranski (CA) Yanick Paquette, Nathan Fairbairn
Justice League Dark crossover conclusion! Another full double-size issue crossover spectacular as Xanadoth, the original Lord of Chaos, has returned. With unlimited power and revenge against all on its mind, the Lord of chaos has taken the form of Black Adam and no. One. Is. Safe. The final chapter of the Eisner-winning Bendis Justice League run wraps up with brand-new status quo for all! Retail: $4.99 In-Store Date: 3/15/2022

Bendis wrote on his Substack newsletter;

First off, we have the JUSTICE LEAGUE ANNUAL fully illustrated by Eisner award-winning Bitter Root co-creator Sanford Greene. This gorgeous annual brings Wonder Woman back to the Justice League and starts a cosmic disturbance that will send the DC universe in chaos and bring us some OMAC!

There are lots of surprises in this double size spectacular.  All of this ties very significantly into the JUSTICE LEAGUE/LEGION OF SUPERHEROES CROSSOVER: THE GOLD LANTERN SAGA that I’ve been talking about for the last few months.

And as we suggested, the Justice League Annual 2021 is getting a name change.

For those keeping score, this is not an issue with the creatives or pandemic. There have been some DC editorial shifts. We are good to go.

We have reported on a few of those as well… 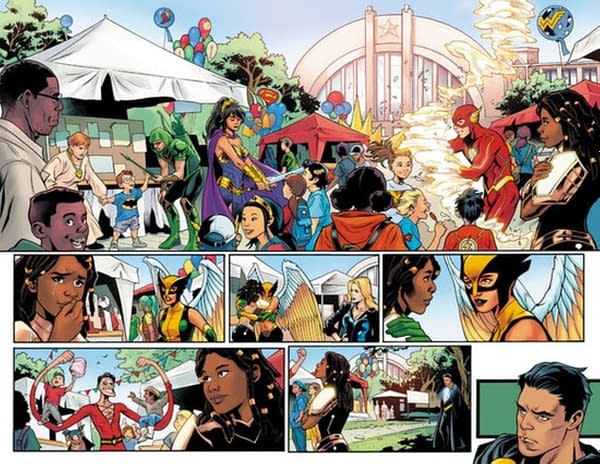 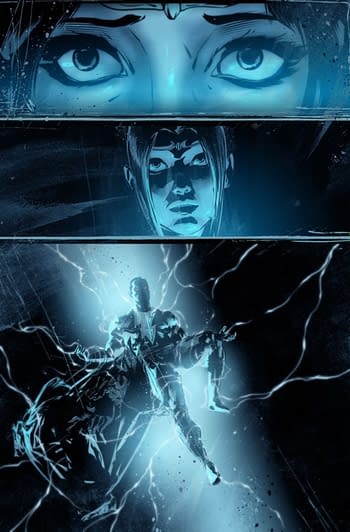 Brian Bendis began writing Justice League with #59 in March 2021, with his final issue one year later, shortly after his exclusive DC Comics deal had come to an end and after he stopped writing the Superman comic books. So who will take his place on the book?

Front runners have to be Ram V and Tom Taylor. Ram V has been writing the Justice League Dark back-up strip which crossed over with the main storyline and would provide a sense of continuity. Ram V has become one of DC Comics’ main writers of late, with critically acclaimed runs on Catwoman and Swamp Thing as well as JLD. But Tom Taylor has been blowing them away on Nightwing, Dark Knights Of Steel, and Superman: Son Of Kal-El, and was recently signed on as a DC Comics exclusive creator, the role that Brian Bendis used to have at the publisher. MIght Tom Taylor also be in for a shot at the big DC Comics team book? Or it could, of course, be someone completely different. Just how many comcis can Josh Williamson write, anyway?

Legend of the Galactic Heroes: Die Neue These Season 3 Previews Part I in Trailer – News

Marvel To Follow Trial Of Magneto With Scarlet Witch Series?