Image Comics and Skybound have announced Stillwater: The Escape #1, a new one-shot special issue of the horror comic book series from Chip Zdarsky and Ramón K Pérez. Stillwater: The Escape promises to deliver “chilling tales of lives upended” in March 2022. Chip posted to his newsletter “We’ve rounded up some amazing talent to tell the UNTOLD STORIES of Stillwater, so they can be then be referred to as TOLD STORIES of Stillwater! Ramon and I are in it as well and are incredibly excited to give you creepy and sad tales around an eternal campfire” 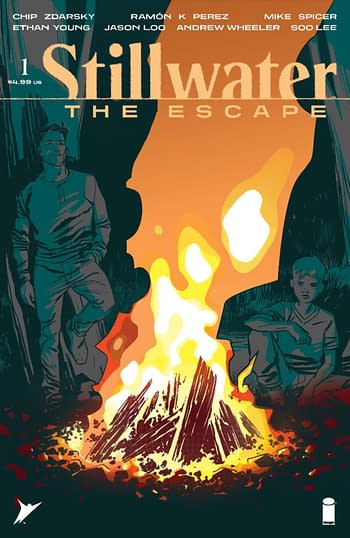 They say no one ever dies in Stillwater and that no one gets to leave…but even for the ones who have freed themselves of the town, is there truly any escaping Stillwater? This 40-page, supersized special tackles so many of the biggest questions you’ve asked that Chip Zdarsky and Ramón Pérez assembled a dream team of acclaimed creators to bring you the answers before the final chapter of Stillwater begins. Ethan Young, Jason Loo, Andrew Wheeler, and Soo Lee all collaborate on The Escape.

Andrew Wheeler, as any fule kno, used to be EIC of Comics Alliance, wrote X-Men columns for Bleeding Cool and once trapped my cat Max out of the house by locking the catflap.

“Working on Stillwater has been a dream come true,” said Zdarsky. “But with an entire town of possible stories, it felt selfish keeping them all to ourselves, so Ramón and I are super excited to have these extremely talented creators exploring some of the eternal citizens of Stillwater!” “Truly there is no bigger compliment than to have creators play in the sandbox you’ve helped realize,” added Pérez. “I’m altogether flattered and excited to share what this wonderful array of talented creators has added to the mythos of Stillwater.”

The Black Phone Has Been Delayed To June Of 2022

Everything Coming To Netflix In January 2022