Writing on his Substack, James Tynion IV shared with his subscribers some of his initial notes to DC Comics, his editors and collaborators on the Batman line, which he has just finished writing. And we have learned much, including his guide to all future Batman writers, which is probably essential reading., And that you’ll have to subscribe to, to actually read.

It’s been strange putting this post together over the last week, and looking at my story concepts that would have taken me through 2023. There are some really good ideas in those documents, ones that could only ever work in Gotham City, and there’s definitely a wistfulness knowing that I’m not going to get around to write them any time soon. There are seeds planted that we’ll see if anybody cultivates into the little gardens and forests that I believed could make Gotham City a richer, more vibrant place. I hope they do, even if they negate the stories I’ll never tell. I left all of these toys in the toy box to be played with, not to be set aside until the day I might possibly come back to them.

But one of the stories he never told was called Scorn. He writes, to collaborator Jorge Jimenez, who seems to have spent much of his time sending YouTube videos to Tynion,

Quick Note: I’ve abandoned the character, Scorn, that we had you design earlier this year. That character felt like her storyllne might be getting a little too close to the real world, and rather than walk through that minefield, I’ve decided to go In another direction,

There might be a female Bane-type character in o more militaristic vein that will appear In the Joker book I’m doing with Guillem, but we will build that character to be something VERY different than the one you and I discussed.

What’s oddr is that during Tynion and Jimenez’s run, in Warren Ellis and Bryan Hitch‘s The Batman’s Grave, they also had a Batman villain called… Scorn. 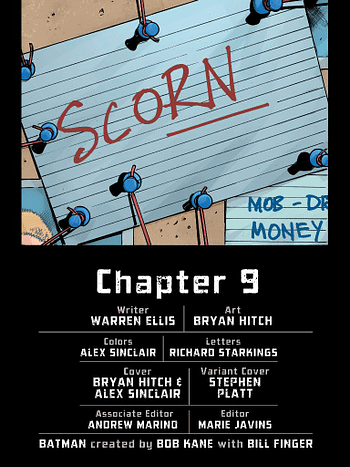 Which is a bit of a weird coincidence. In The Batman’s Grave, Scorn is Robert Anthony, whose parents were killed in front of him by the police, and has become an anti-Batman. And who views Batman as part of the same system that led to his parents’ deaths. His solution is to burn both the Gotham police, and the Batman, to the ground, and has gained a swell of support from Gotham’s citizens in the process.

Would James Tynion IV had to have changed his version of Scorn? Would Warren Ellis? Would both have lived happily alongside each other? What… if?