We’re beyond thrilled to announce that today we, Comic Book Workers United, have WON our union election, making Image Comics the FIRST unionized comic book publisher in the United States. All 12 Image staffers submitted ballots, leading to a 7:2 result in favor of the union. At this time, three staffers’ ballots are subject to a frivolous legal challenge on eligibility, thus their ballots were not opened. Although these three ballots were not opened, their challenge had no impact on our supermajority win. CBWU and the CWA continue to push for their inclusion in the democratic process. 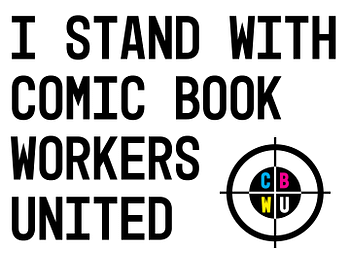 With Image Comics representatives issuing us with the statement

“Earlier this morning the Communications Workers of America (CWA) and National Labor Relations Board vote results were tallied, 7 – 2, in favor of unionization. Everyone at Image is committed to this process and we look forward to continuing to work together on this.”

We had questions, of course, about those “frivolous legal challenges” and Image’s response didn’t tally with their previously reported lack of recognition of the union before going through the full legal route. We do have lots of questions to ask and two months after we asked them, we might be getting some answers. But we do, now, have a new statement from Comic Book Workers United, clarifying the language somewhat and adding more details. The Comic Book Workers United tells Bleeding Cool that;

We are thrilled to announce that, on Thursday, January 6th, Comic Book Workers United won our historic NLRB election victory to join CWA Local 7901, making the workers of Image Comics the first comic book workers in the United States with collective bargaining rights!

As you no doubt recall, CBWU initially went public and requested voluntary recognition from Image Comics, with 10 out of 12 eligible employees supporting the union. Image Comics declined to grant that voluntary recognition and forced an NLRB election, which the CBWU won with all 10 public members voting YES. This result has been confused by the current vote tally of 7-2, due to a frivolous supervisory challenge of three CBWU members by Image Comics. CBWU and CWA are continuing to request Image Comics drop their challenge to those three employees so that their YES votes can be counted towards the supermajority which the CBWU already has, and which resulted in our overwhelming victory.

The members of Comic Book Workers United are #DrawnInSolidarity in their mission to address systemic issues in their workplace and in the comic book industry as a whole. We hope that our election results inspire other comic book workers and creators across the industry to organize for a democratic voice, whether that be through unions or guilds, and are looking forward to helping industry peers with organizing under the Comic Book Workers United banner. Our next steps include advocating for our remaining three colleagues’ votes to be counted in the initial election and beginning the process of negotiations that will codify the goals we have outlined and reiterated throughout the organizing process, and hopefully provide a useful model for others seeking the respect, fair treatment, and fair compensation that all workers deserve.

Bleeding Cool sent a bunch of questions to the Comic Book Workers United about their plans, their motivations, their goals, and the influence they hope to have across the comic book industry. How much of an influence can ten comic book employees have? We are about to see…