In Black Panther #2, the ghost of international intrigue haunts the nation of Wakanda as the sequestered land addresses a possible “Richard Armitage dropping a dime” situation threatening its intelligence officers in the world. Given Wakanda’s new transition to a parliamentary democracy, the new limits of his role as chieftain of the Panther Clan chafe for T’challa.

The problem with a spy coming in from the metaphorical cold is that some of them got acclimated to their environs and are reluctant to just let all those threads sever and fray. T’challa is personally delivering the news and, in the words of one of these frustrated agents Omolola, “your ability to elicit a range of emotions from your subjects is … well … how about ‘unique?'”

Meanwhile, T’challa’s sister Shuri proves why she is, in fact, one of the Marvel universe’s pre-eminent thinkers, flying into Santiago, Chile, and piecing together what happened to the slain agent Jhai, one of T’challa’s best friends from childhood. The tech on display is fun, and Shuri’s investigative methods would put Adrian Monk or Shawn Spencer to shame. This leads to interesting developments until the siblings reunite, just in time to encounter three deadly new minions of the as-yet-unnamed threat.

John Ridley’s script is fantastic, weaving thrills with humor and innovative presentations of detail. This takes the cinematic Wakanda approach and continues to let it grow in fun new directions. The way this plays the world of spies as a shadow of the superhero adventures we normally see is very engaging. The striking visuals of Juann Cabal, Federico Blee, and Joe Sabino convey wonderful details of the disparate players here.

This is a very smart, very engaging continuation of the work done by Priest and Hudlin, creating a lane just for T’challa that’s a perfect fit. RATING: BUY.

Black Panther #2
By John Ridley, Juann Cabal
THE LONG SHADOW PART 2! T’Challa must act quickly to save his sleeper agents before they are assassinated! With the help of his sister, Shuri, he might be one step closer to the culprits — but is it too late? The assassins seem to always be one step ahead. And T’Challa better watch his back, for secrets lie everywhere. 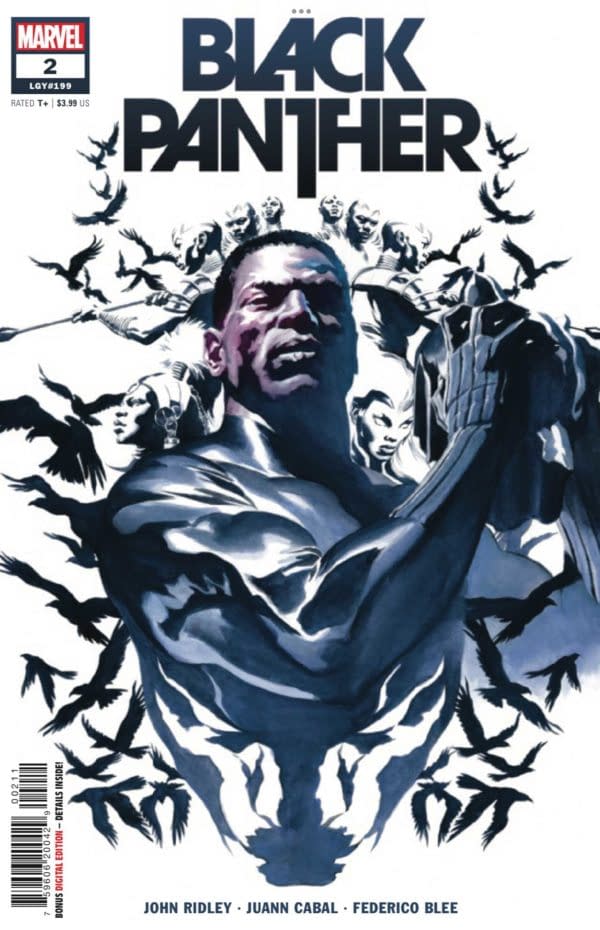 The ghost of paranoia past haunts Wakanda’s uncharted future, and T’challa’s ready to strap on a proton pack and make sure it doesn’t steal the show.